They are at it again in Madison. “Wisconsin lawmakers introduce prostitution surcharge bill.”AP headline

“Wisconsin legislators are bringing back a bill that would impose a new fine on anyone convicted of soliciting prostitutes.”

The bill circulated by Senators Jacque and Wanggard along with Representatives Taylor and Brandtjen would impose a $5,000 fine on anyone convicted of patronizing, pander or soliciting prostitutes or keep a place of prostitution.

“Puritanism. The haunting fear that someone, somewhere, may be happy.” H.L. Mencken 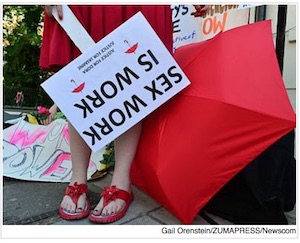 We believe that for there to be a crime, there must be a victim. In this case, a sex worker offers sex for a price. A customer is willing to pay the price. There is no victim to file a complaint. Since both get what they want from the transaction, the usual way for the police to arrest a buyer is by entrapment, or a “sting.”

The purpose of government is supposed to be to protect life, liberty, and property from violence or fraud. the government should not be concerned with keeping people from vice or bad habits and regulating or prohibiting activities that take place between consenting adults. A “nanny state” is a perversion of government.

As Libertarians, the Party of Principle, we defend each person’s right to engage in any activity that is peaceful and honest and we welcome the diversity that freedom brings. We apply that to sex work.

And, while members of the Libertarian Party of Wisconsin advocate abolishing laws governing certain voluntary behaviors, this does not necessarily imply endorsement of such behaviors. We only make the statement that in such matters an individual’s right to free choice must be recognized and the morality of such choices is not a concern of government.

Based on these principles, the Libertarian Party of the United States officially “supports the decriminalization of prostitution,” according to a new plank in the party’s political platform. This makes the L.P. the only notable U.S. political party to stand unequivocally for sex-worker rights and in opposition to cops persecuting people for consensual sex.